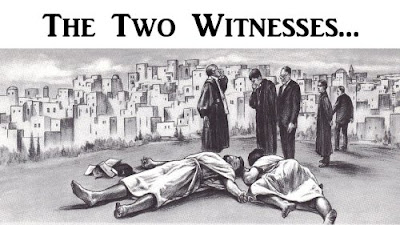 Here the two witnesses of God are revealed.

11 Then answered I, and said unto him, What are these two olive trees upon the right side of the candlestick and upon the left side thereof?

12 And I answered again, and said unto him, What be these two olive branches which through the two golden pipes empty the golden oil out of themselves?

13 And he answered me and said, Knowest thou not what these be? And I said, No, my lord.

14 Then said he, These are the two anointed ones, that stand by the Lord of the whole earth.

1 And after six days Jesus taketh Peter, James, and John his brother, and bringeth them up into an high mountain apart,

2 And was transfigured before them: and his face did shine as the sun, and his raiment was white as the light.

3 And, behold, there appeared unto them Moses and Elias talking with him.

4 Then answered Peter, and said unto Jesus, Lord, it is good for us to be here: if thou wilt, let us make here three tabernacles; one for thee, and one for Moses, and one for Elias.

5 While he yet spake, behold, a bright cloud overshadowed them: and behold a voice out of the cloud, which said, This is my beloved Son, in whom I am well pleased; hear ye him.

7 And when he had opened the fourth seal, I heard the voice of the fourth beast say, Come and see.

8 And I looked, and behold a pale horse: and his name that sat on him was Death, and Hell followed with him. And power was given unto them over the fourth part of the earth, to kill with sword, and with hunger, and with death, and with the beasts of the earth.

1 And there was given me a reed like unto a rod: and the angel stood, saying, Rise, and measure the temple of God, and the altar, and them that worship therein.

2 But the court which is without the temple leave out, and measure it not; for it is given unto the Gentiles: and the holy city shall they tread under foot forty and two months.

3 And I will give power unto my two witnesses, and they shall prophesy a thousand two hundred and threescore days, clothed in sackcloth.

4 These are the two olive trees, and the two candlesticks standing before the God of the earth.

6 These have power to shut heaven, that it rain not in the days of their prophecy: and have power over waters to turn them to blood, and to smite the earth with all plagues, as often as they will.

7 And when they shall have finished their testimony, the beast that ascendeth out of the bottomless pit shall make war against them, and shall overcome them, and kill them.

8 And their dead bodies shall lie in the street of the great city, which spiritually is called Sodom and Egypt, where also our Lord was crucified.

10 And they that dwell upon the earth shall rejoice over them, and make merry, and shall send gifts one to another; because these two prophets tormented them that dwelt on the earth.

11 And after three days and an half the spirit of life from God entered into them, and they stood upon their feet; and great fear fell upon them which saw them.

12 And they heard a great voice from heaven saying unto them, Come up hither. And they ascended up to heaven in a cloud; and their enemies beheld them.

13 And the same hour was there a great earthquake, and the tenth part of the city fell, and in the earthquake were slain of men seven thousand: and the remnant were affrighted, and gave glory to the God of heaven.

14 The second woe is past; and, behold, the third woe cometh quickly.

Chosen to be a child of God by God

David K Smith
I believe in my one and only God and Father, the Holy Spirit Jesus Christ, my Lord, and Saviour, who was manifest in the flesh, to have saved me from my sins, and not only mine, but the whole world, and all that would believe in the one that God had sent. Amen.